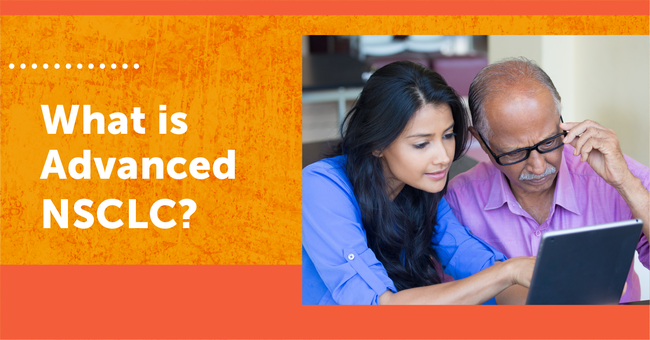 Non-small cell lung cancer is the most common type of lung cancer, accounting for around 90 percent of all lung cancer diagnoses. Like other cancers, NSCLC is considered advanced when it has spread outside the area where the tumor first began growing. At the time of diagnosis, 40 percent of people with NSCLC have advanced (stage 4) disease.

There are three types of NSCLC, which are defined by the different cells where cancer develops:

The remaining percentage of NSCLC cases include other, rarer subtypes at different frequencies.

When cancer spreads outside its original location, this is known as metastasis. Metastasis is a complex process, where cancer cells break away from the primary tumor and travel through the blood or lymph systems to form another tumor in the body.

Lung cancer typically doesn’t cause any symptoms until it is advanced. This means that it is difficult to detect lung cancer early. Over half of all lung cancer cases aren’t diagnosed until tumors have already metastasized to other locations in the body.

Early symptoms of lung cancer include:

If advanced lung cancer has spread to other sites in the body, it may cause site-specific symptoms.

How Is Advanced NSCLC Diagnosed?

Lung cancer screening can be performed if a person currently smokes or has previously smoked tobacco for many years, is between the ages of 55 and 74, and is fairly healthy. If cancer is found early, treatment is more likely to be successful. If you suspect you may be experiencing symptoms of lung cancer, contact your doctor to set up testing.

Your doctor will begin with a medical history and physical exam to identify possible risk factors and signs of lung cancer. If they find anything during the exam that might suggest lung cancer, more tests will be done.

Imaging tests can be used to look inside the lungs for cancer and see if it has spread. Some examples of imaging tests include:

Read the related article Newly Diagnosed With Advanced NSCLC: What You Need to Know.

While symptoms and imaging tests can suggest cancer, the only way to definitively diagnose it is by looking at lung cells under a microscope. The cells can be collected from mucus, from fluid around the lung, or from a biopsy. Depending on the situation, different tests may be used to come to a conclusive diagnosis. These tests may include:

The severity of cancer is measured by its stage. Stages range from 0 (also known as carcinoma in situ) through stage 4 (stage IV). An earlier letter within a stage means it is less advanced — for example, 3A versus 3B. While every cancer case is unique, cancers can have similar stages which dictate treatment and disease outlook.

Cancer is caused when too many genetic mutations develop in a cell and lead to uncontrolled growth. The most common cause of lung cancer is smoking tobacco; men who smoke are 23 times more likely to develop NSCLC, and women are 13 times more likely.

Lung cancer can also develop in people who have never smoked, usually through inheritance of gene changes from family members. These cases occur most often in younger people. Other irritants, like air pollution, radon, asbestos, and other chemicals, can cause mutations in lung cells.

How Is Advanced NSCLC Treated?

Treatment for advanced NSCLC depends on many factors, including staging, the size of the tumor, where it is located, which lymph nodes it has spread to, your overall health, and how well you have been tolerating treatment. Chemotherapy, radiation therapy, and targeted therapies are the most common treatment options for NSCLC. New advances in immunotherapy are also expanding treatment possibilities.

Chemotherapy is a broad term used to describe drugs that target and kill rapidly dividing cells in the body. Chemotherapy drugs are given through an intravenous (IV) infusion or taken by mouth. The drugs travel through the bloodstream and reach almost every part of the body to target and kill cancer cells.

Radiation therapy (also known as radiotherapy) uses an intense beam of radiation to kill cancer cells and shrink tumors. The type of radiation is similar to that used in X-rays, but it is much more concentrated for cancer treatment. Radiotherapy works by damaging the DNA of cancer cells beyond repair, causing the cells to stop dividing or die.

Immunotherapy is a relatively recent advancement in the treatment of lung cancer. In immunotherapy, human-made proteins (known as monoclonal antibodies) help activate the immune system to target and kill cancer.

Read more about each category of lung cancer treatment in the related article Treatment Options for Advanced NSCLC.

Targeted therapy refers to the class of drugs that work by “targeting” specific mutations or growth factors in cancer. Because the drugs are so specific, this helps minimize damage to other cells and causes fewer side effects than traditional chemotherapy.

Classes of targeted therapy for advanced NSCLC include small-molecule inhibitors and angiogenesis inhibitors, which work in different ways to slow the growth or encourage the death of lung cancer cells.

You are not alone in living with advanced NSCLC. When you join MyLungCancerTeam, you gain a community of others who know what it’s like to face a lung cancer diagnosis. Members share experiences, support each other through challenges, and offer tips to manage symptoms and make life easier.

Emily Wagner, M.S. holds a Master of Science in biomedical sciences with a focus in pharmacology. She is passionate about immunology, cancer biology, and molecular biology. Learn more about her here.
hug (2) like (4) comment (4)
sign up to view previous comments 1 of 4

posted about 2 months ago

If you have lung cancer, having other health conditions at the same time may make treatment more...

If you have lung cancer, having other health conditions at the same time may make treatment more...
read article >