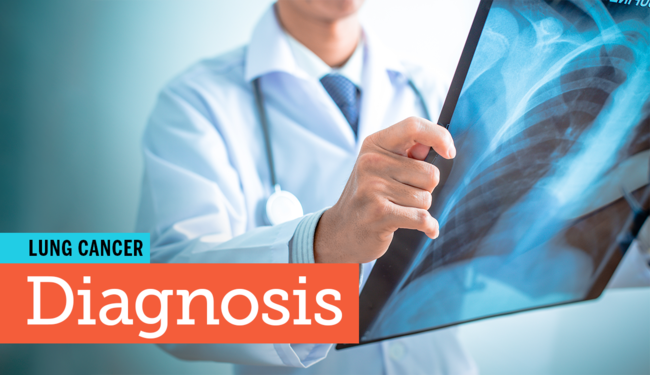 Lung cancers can be difficult to diagnose due to lack of regular screening. Most often, lung cancer is found when symptoms become noticeable. If you believe you are experiencing symptoms of lung cancer, speak with your doctor.

The diagnostic process begins with a visit to your doctor. Your doctor will start with a medical history and physical exam to identify possible risk factors for and symptoms of lung cancer. If they find anything during the exam that might suggest lung cancer, more tests will be done.

Imaging tests can be used to look inside the lungs to identify if cancer is present and if it has spread. Imaging can be used:

A chest X-ray is usually the first imaging test your doctor will perform to look for any abnormal areas or masses in the lung. Images are taken from the front and back of the chest. Chest X-rays have also been studied as a method of lung cancer screening, but they are not as informative as other methods. If your doctor finds something on a chest X-ray, they will often order a computed tomography (CT) scan to confirm the findings.

A CT scan uses X-rays to make detailed images of your body at multiple angles. The CT scanner takes many pictures, and then a computer combines them to study the body in more detail.

A CT scan is more likely than a chest X-ray to pick up on lung tumors. It can also show the shape, size, and position of lung tumors and any lymph nodes where the cancer may have spread. In addition to the lungs, CT scans can spot abnormal areas in the liver, brain, adrenal glands, and other organs where lung cancer might metastasize.

Magnetic resonance imaging (MRI) scans are another technique for generating detailed images of the body. However, MRI scans use strong magnets and radio waves instead of X-rays. They are most often used to look for the spread of lung cancer to the spinal cord or brain.

For a positron emission tomography (PET) scan, a slightly radioactive form of sugar is injected into a vein and collects in cancer cells. A PET/CT scan can be used for diagnosing lung cancer. It is not recommended for follow-up scans after treatment. This scan can also detect cancer that has spread to the bones, liver, adrenal glands, and other organs; but it is not useful for looking at the spinal cord or brain.

Bone scans can spot cancer that may have metastasized from the lungs to the bones. A slightly radioactive material is injected into the blood and collects in the bones over a few hours. Scans are then done to look for areas of higher radioactivity which may indicate cancer.

While symptoms and imaging tests can suggest cancer, the only way to definitively diagnose it is by looking at lung cells under a microscope. The cells can be collected from mucus, fluid around the lung, or a tissue biopsy. Depending on the situation, different tests may be necessary to come to a conclusive diagnosis.

Sputum cytology is the analysis of a sample of sputum (mucus) under a microscope to look for cancer cells. The samples are collected early in the morning, three days in a row. Sputum cytology is best for finding cancer types that start in the major airways of the lung, like squamous cell lung cancers. It is possible for sputum cytology tests to be negative even if there is lung cancer, so other tests will be needed.

If there is fluid collecting around the lungs (known as a pleural effusion), your doctor may perform thoracentesis. Fluid buildup can be caused by cancer spread from the lungs to the pleura or by an infection or heart failure.

During the procedure, the skin is numbed and a hollow needle is inserted between the ribs, draining the fluid. The fluid is then sent to a lab to check for cancer cells. Thoracentesis can also be performed to relieve pressure from fluid buildup around the lungs, helping a person breathe better.

Bronchoscopy involves the use of a thin, flexible tube with a light and camera attached to the end (known as a bronchoscope). The tube is inserted through the nose or mouth and travels down into the lungs. This allows doctors to look inside the lungs and airways for any tumors or blockages.

When doctors want to sample tissue to look for cancer, they use a needle biopsy. The area where cancer is suspected is numbed, and a hollow needle is inserted there to remove tissue. The biopsy is then analyzed for cancer cells.

One advantage of needle biopsies is that they are not surgical procedures, and they can be performed relatively quickly. The drawback is that the biopsy only removes a very small tissue sample. In some cases, the sample may not have enough cancerous tissue to tell the doctor everything they need to know.

Fine needle aspiration (FNA) biopsies use a very thin, hollow needle to extract cells and small pieces of tissue from the suspected area. A transtracheal or transbronchial FNA can be performed by inserting the needle through the wall of the trachea (windpipe) or bronchi (airways) during an endobronchial ultrasound or bronchoscopy. An FNA biopsy can be used to look for cancer in the lymph nodes between the lungs.

A core biopsy requires a larger hollow needle to remove tissue. Core biopsy samples are larger than FNA biopsies and can be better for diagnosing lung cancer. A core biopsy may involve local anesthesia.

A transthoracic needle biopsy is performed if a suspected tumor is in the outer part of the lungs. The area is numbed, and the biopsy needle is inserted through the skin on the chest wall. A CT scan or other imaging method is used to help guide the needle.

Tests for Lung Cancer Spread in the Chest

Several tests may be used to determine if lung cancer has spread beyond the lungs.

During a mediastinoscopy, lymph nodes along the windpipe and in the major bronchial tube areas can be biopsied or removed to look for cancer. Medianstinoscopy can also be used to stage lung cancer.

If some lymph nodes cannot be reached by mediastinoscopy, a surgeon may perform a mediastinotomy to remove biopsy samples. A slightly larger incision (around 2 inches long) is made between the left second and third ribs next to the breastbone. Then a tube is placed in the incision, allowing the surgeon to take tissue samples.

An endobronchial ultrasound (EBUS) bronchoscopy is used to diagnose lung cancer, inflammation, or infections. A pulmonologist (lung specialist) uses a bronchoscope to look at your trachea and lungs. EBUS can also examine lymph nodes and other structures between the lungs, allowing the doctor to take biopsies.

An endoscopic ultrasound (EUS) uses high-frequency sound waves to generate detailed images of the chest and lymph nodes. It can be used to follow up on findings from a CT scan or MRI showing possible cancer. In confirmed cancer cases, EUS can also provide precise information on how deep a tumor is and if the cancer has spread to lymph nodes or other organs.

Doctors can use thoracoscopy to look inside the chest to find out if cancer has spread in the space between the lungs and the chest wall. It can also be used to take tissue samples from the outer parts of the lungs, the lymph nodes, and fluids. A thoracoscopy can be combined with video-assisted thoracic surgery (VATS) to remove tissue in early stage lung cancers.

Genetic testing can identify mutations in genes associated with lung cancer, most commonly non-small cell lung cancer. Cancers with these genetic mutations can often be treated with targeted drugs. Examples of commonly mutated genes include:

While they do not diagnose lung cancer directly, blood tests can help doctors better understand your general health. The results may determine if you are healthy enough for surgery or other kinds of cancer treatments.

Blood chemistry tests help find abnormalities in organs, like the kidneys or liver. For example, if lung cancer has metastasized to the bones, it may raise the levels of calcium and alkaline phosphatase (an enzyme that breaks down proteins) in your blood.

A complete blood count (CBC) panel looks at the numbers of different blood cells in your body. A CBC can alert your doctors to any abnormalities, such as whether you are susceptible to infections due to a low number of white blood cells. CBC panels may be taken repeatedly during treatment to monitor your blood cell counts, as cancer treatments can affect the blood-forming cells in the bone marrow.

Emily Wagner, M.S. holds a Master of Science in biomedical sciences with a focus in pharmacology. She is passionate about immunology, cancer biology, and molecular biology. Learn more about her here.
hug like comment (2)
sign up to view previous comments 1 of 2

If you are living with lung cancer, you may be curious as to what role vitamin D plays in your...

If you are living with lung cancer, you may be curious as to what role vitamin D plays in your...
read article >

Comedian Kathy Griffin is the most recent celebrity to reveal a diagnosis of lung cancer. By...

Comedian Kathy Griffin is the most recent celebrity to reveal a diagnosis of lung cancer. By...
read article >

Lung cancer is the most common cancer worldwide. There are two main types of lung cancer: small...

Lung cancer is the most common cancer worldwide. There are two main types of lung cancer: small...
read article >

Chronic obstructive pulmonary disease (COPD) is a group of conditions that affects the lungs....

Chronic obstructive pulmonary disease (COPD) is a group of conditions that affects the lungs....
read article >

When combined with standard cancer treatments, supplements and natural or alternative therapies —...

Lung cancer may not cause noticeable symptoms in its early stages, and there are not yet good...

Lung cancer may not cause noticeable symptoms in its early stages, and there are not yet good...
read article >

Lung cancer is the most common type of cancer in the world, but there are currently no good...

Lung cancer is the most common type of cancer in the world, but there are currently no good...
read article >

To determine how you can reduce your medical expenses, MyLungCancerTeam sat down with Susan Null...

To determine how you can reduce your medical expenses, MyLungCancerTeam sat down with Susan Null...
read article >

Before you begin treatment for non-small cell lung cancer (NSCLC), you may have many questions...

Before you begin treatment for non-small cell lung cancer (NSCLC), you may have many questions...
read article >