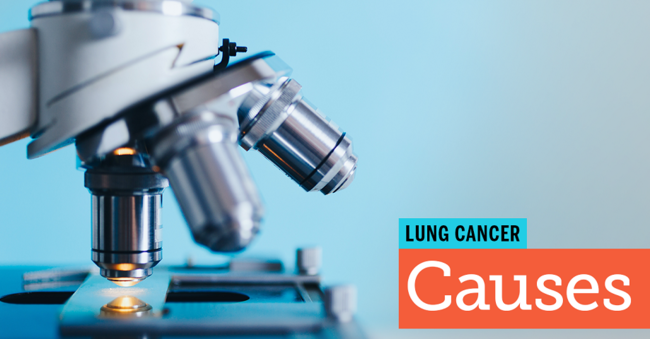 There are two main types of genetic mutations — inherited and acquired.

Most gene changes related to lung cancer are acquired during life, as opposed to being inherited from family. Lung cancer can run in families, but it is usually caused by environmental factors. It remains unclear why some people develop lung cancer and others do not.

How Cells Transform Into Cancer

Normal cells divide in a regular, ordered fashion, creating new cells that are exact copies to replace old ones. Certain genes are responsible for telling cells when to divide and when to stop. Other genes and proteins search for problems in DNA and fix them when DNA is not copied correctly. If a problem is found that cannot be fixed, the cell will self-destruct.

If a genetic mutation turns certain genes on or off, then cells can divide at a faster rate without regulation or order. In turn, this allows more and more mutations to accumulate, speeding the unchecked growth of abnormal cells. Eventually, these cells will form a tumor and become cancerous.

It is important to note that while science is good at finding correlations — or apparent relationships — between factors and disease, correlation does not prove the factor causes the disease. Many risk factors for lung cancer have been identified and are being studied for their role in the development of the disease.

Mutations in DNA are inevitable, and they accumulate with age. In rapidly dividing tissues, researchers estimate that tens of thousands of mutations may accumulate by age 60. However, cancer only develops in a small percentage of people.

If you have a family history of lung cancer, you are at an increased risk of developing it yourself. Having siblings or parents who had lung cancer may slightly increase your risk, particularly if they were diagnosed at a younger age. It is also possible that you may share exposure to environmental risk factors with them, such as radon or secondhand tobacco smoke. Overall, approximately 8 percent of lung cancer cases are inherited or due to genetic predisposition.

In some cases of lung cancer, people may inherit faulty genes or mutations from their parents. People who inherit mutations found on chromosome 6 are more likely to develop lung cancer, regardless of their smoking status. Usually, these few inherited mutations are not enough alone to cause many lung cancers.

Since cancer is an age-related disease, it is thought that lung cancer in younger people may be due to inherited factors. Some people may inherit faulty DNA-repair mechanisms or a reduced ability to break down carcinogens. All of these factors can contribute to an increased risk of lung cancer.

According to the American Lung Association, more men are diagnosed with lung cancer each year, but more women currently live with the disease. Black men are more likely to develop and die from lung cancer compared to any other racial or ethnic group in the U.S.

Those with American Indian/Alaska Native, Asian/Pacific Islander, and Hispanic ethnicity develop lung cancer at lower rates compared to white and Black groups. A mutation in the epidermal growth factor receptor (EGFR) protein is associated with NSCLC adenocarcinoma cases in young Asian women who do not smoke.

Some people who smoke all their lives never develop lung cancer, while some light smokers or nonsmokers may develop it. However, the leading risk factor for lung cancer is smoking, and smoking accounts for around 80 percent of lung cancer deaths. Smoking is a major risk factor for SCLC in particular, which is almost never diagnosed in people who do not smoke.

The method of smoking does not seem to affect the risk of developing lung cancer — cigarettes, cigars, and pipes all contribute to the increased risk. Tobacco smoke contains known carcinogens that damage lung cells and lead to cancer. Therefore, exposure to secondhand smoke may also increase your risk of lung cancer.

Vaping and e-cigarettes are newer forms of smoking, and no studies are available on their long-term effects. However, researchers believe that vaping might not directly cause lung cancer, but vaping raises the risk of developing lung cancer in people who have never smoked before. Inhaling secondhand e-cigarette vapor may also carry risks.

Air pollution seems to slightly increase the risk of lung cancer. This can be true in cities with high levels of air pollution, especially near busy roads. However, it appears to be far less of a risk compared to smoking. About 5 percent of all lung cancer deaths may be caused by outdoor air pollution.

Radon gas can be found in buildings in nearly any part of the United States, especially in basements. Breathing in radon exposes your lungs to microdoses of radiation, increasing your risk of developing lung cancer.

Asbestos is a fibrous material that was commonly used as insulation in older buildings. If asbestos fibers are inhaled or ingested, they can become permanently trapped in the body. This can cause inflammation and irritate the lungs, eventually leading to cancer.

People who work with asbestos and are exposed to large amounts of it have a greater risk of developing mesothelioma, a type of lung cancer. Asbestos can be found in many workplaces, such as mills, mines, textile plants, and shipyards. Furthermore, the lung cancer risk is much greater in workers exposed to asbestos who also smoke. Most cases of lung cancer occur at least 15 years after the first exposure to asbestos.

Chemicals in the Workplace

Here are some other carcinogens found in some workplaces that can increase the risk of lung cancer:

Recently, there has been more awareness around protecting workers from harmful chemicals, but any exposure may still put you at risk. Always use protective equipment and limit your exposure to carcinogenic materials whenever possible.

Radiation therapy is a useful cancer treatment that damages cancer cells beyond repair, causing them to stop growing or die. Unfortunately, radiation can also damage healthy cells in the body, increasing the risk of cancer.

People who have had radiation therapy to the chest to treat other types of cancer are at a higher risk for developing lung cancer, especially if they smoke. This might include women who have been treated with chest radiation for breast cancer and people who have been treated for Hodgkin lymphoma. However, women who receive radiation therapy following a lumpectomy on the breast do not appear to have a higher risk of lung cancer.

Can Lung Cancer Be Prevented?

There is no certain way to avoid getting lung cancer, but you can lower your chances. While risk factors such as family history and previous cancer treatment cannot be changed, there are lifestyle and environmental factors that may be within your control.

If you are concerned that you may be at a higher risk for developing lung cancer, here are some measures you can take to lower your risk:

Emily Wagner, M.S. holds a Master of Science in biomedical sciences with a focus in pharmacology. She is passionate about immunology, cancer biology, and molecular biology. Learn more about her here.
hug like (2) comment

If you are living with lung cancer, you may be curious as to what role vitamin D plays in your...

If you are living with lung cancer, you may be curious as to what role vitamin D plays in your...
read article >

Comedian Kathy Griffin is the most recent celebrity to reveal a diagnosis of lung cancer. By...

Comedian Kathy Griffin is the most recent celebrity to reveal a diagnosis of lung cancer. By...
read article >

Lung cancer is the most common cancer worldwide. There are two main types of lung cancer: small...

Lung cancer is the most common cancer worldwide. There are two main types of lung cancer: small...
read article >

Chronic obstructive pulmonary disease (COPD) is a group of conditions that affects the lungs....

Chronic obstructive pulmonary disease (COPD) is a group of conditions that affects the lungs....
read article >

When combined with standard cancer treatments, supplements and natural or alternative therapies —...

Lung cancer may not cause noticeable symptoms in its early stages, and there are not yet good...

Lung cancer may not cause noticeable symptoms in its early stages, and there are not yet good...
read article >

Lung cancer is the most common type of cancer in the world, but there are currently no good...

Lung cancer is the most common type of cancer in the world, but there are currently no good...
read article >

To determine how you can reduce your medical expenses, MyLungCancerTeam sat down with Susan Null...

To determine how you can reduce your medical expenses, MyLungCancerTeam sat down with Susan Null...
read article >

Before you begin treatment for non-small cell lung cancer (NSCLC), you may have many questions...

Before you begin treatment for non-small cell lung cancer (NSCLC), you may have many questions...
read article >