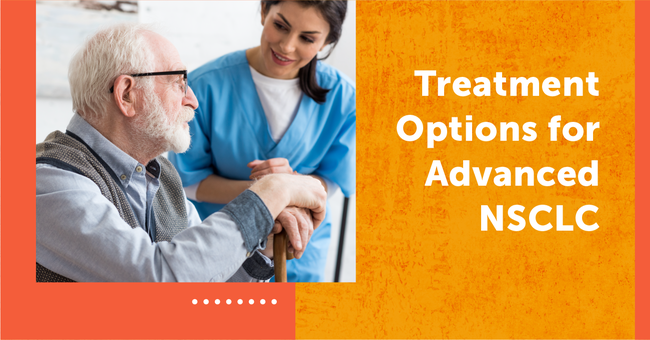 The U.S. Food and Drug Administration (FDA) has approved a number of drugs and treatment options for advanced NSCLC, including surgery, chemotherapy, radiation, targeted therapies, and immunotherapy. Your oncologist will discuss with you which options are best.

Non-small cell lung cancer is one of the most commonly diagnosed cancers in the United States. NSCLC is difficult to catch early because there are little to no symptoms in early stages. As a result, most cases are not caught until they have reached advanced stages — stage 3 or stage 4 — when cancer has spread beyond the location of the original tumor.

Read What Is Advanced NSCLC?

Treatment options for advanced NSCLC depend on many factors, including staging, the size of the original tumor, where it is located, and where cancer has spread. Doctors also take into account your overall health and how well you have been tolerating treatment when deciding which treatment to recommend.

Surgery may be used as a first treatment in some cases of stage 3A NSCLC, when cancer has spread in a limited way to nearby lymph nodes. In stage 3B and stage 4, lung cancer has spread further, and tumors cannot be completely removed with surgery.

Chemotherapy is a broad term used to describe drugs that target and kill rapidly dividing cells in the body. Due to its intense nature and number of side effects, chemotherapy is not recommended for people in poor health. Chemotherapy drugs are given through an intravenous (IV) infusion or taken by mouth. The drugs travel through the bloodstream and reach almost every part of the body to target and kill cancer cells.

Some examples of chemotherapy treatments used for NSCLC include:

Side Effects of Chemotherapy for Advanced NSCLC

Because chemo also kills these types of cells, side effects of chemo often include hair loss, bruising, nausea, and vomiting.

Radiation therapy (also known as radiotherapy) uses an intense beam of radiation to kill cancer cells and shrink tumors. The type of radiation is similar to that used in X-rays, but it is much more concentrated for cancer treatment.

External beam radiation uses a radiation source on the outside of the body to focus on the cancer. It can be used as:

Internal radiation therapy, also known as brachytherapy, involves placement of small radioactive pellets directly into the cancer to help shrink a tumor. The doctor uses a special tool called a bronchoscope to see inside the airways and passageways of the lungs (known as bronchi) to place the pellets. The radiation can only travel a short distance from the source, so it is less likely to damage the surrounding healthy tissues.

Immunotherapy is a relatively recent advancement in the treatment of cancer. It uses human-made antibodies (known as monoclonal antibodies) that help activate the immune system to target and kill cancer. Immunotherapy targets specific cells in the body, which prevents the systemic side effects seen in treatments like chemotherapy.

One class of checkpoint inhibitors target two proteins, PD-1, found on immune cells known as T cells, and PD-L1, which is found on some normal cells and some cancer cells. Monoclonal antibodies have been developed that target either PD-1 or PD-L1, preventing interaction between the two proteins. As a result, the T cells are able to recognize the cancer cells and kill them, while also activating a helpful immune response.

CTLA-4 inhibitors are another class of immunotherapy for NSCLC. These monoclonal antibodies target CTLA-4, a protein that reins in T cell activity.

Targeted therapy refers to a class of drugs that work by identifying specific mutations or growth factors in cancer cells and damaging or destroying them. Because these drugs are so specific, they help minimize damage to other cells and often cause fewer side effects.

Small-molecule inhibitors are chemically synthesized drugs that can be used to target specific mutations in cancer. One example are tyrosine kinase inhibitors (TKIs), named after the proteins they target in cells. In cases of NSCLC, there are common genetic mutations that contribute to the development of the cancer. These include:

These genes are all involved in specialized signaling pathways that normally tell healthy cells when to grow and divide. However, when they become mutated, these signals cannot be shut off. The cancer cells are then able to grow and divide uncontrollably, creating a tumor.

Fortunately, if you have one of these mutations, you can be treated with a targeted therapy. These drugs require a mutation to target in order to work. These mutations can be identified through DNA sequencing of the tumor. There are a number of first-, second-, and even third-generation drugs that have been approved for treating NSCLC containing specific mutations. For EGFR mutations, the approved treatments include Iressa (gefitinib), Tarceva (erlotinib), Tagrisso (osimertinib), and Gilotrif (afatinib). For EML4-ALK fusions, there are the drugs Alecensa (alectinib), Xalkori (crizotinib), and Zykadia (ceritinib).

There are currently no approved targeted therapies for KRAS mutations. However, there are experimental drugs in clinical trials that seem promising.

Vascular endothelial growth factor (VEGF) is responsible for initiating the growth of new blood vessels in the body, using a process called angiogenesis. Large tumors need their own blood supply to take in oxygen and nutrients. Cancer cells sometimes learn to make their own VEGF in order to grow new vessels.

Avastin (bevacizumab) and Cyramza (ramucirumab) are monoclonal antibody drugs that work by blocking VEGF from binding to its receptor, stopping the formation of new blood vessels.

You are not alone in living with NSCLC. When you join MyLungCancerTeam, you gain a community of others who know what it’s like to face a cancer diagnosis.

Have you been recently diagnosed with NSCLC? Read Newly Diagnosed With Advanced NSCLC: What You Need to Know.

Emily Wagner, M.S. holds a Master of Science in biomedical sciences with a focus in pharmacology. She is passionate about immunology, cancer biology, and molecular biology. Learn more about her here.
hug (2) like (2) comment (2)
sign up to view previous comments 1 of 2

Thank you for your passion in the studies of NSCLC. BLESSINGS ALWAYS

If you have lung cancer, having other health conditions at the same time may make treatment more...

If you have lung cancer, having other health conditions at the same time may make treatment more...
read article >